Why bother with updates and upgrades? 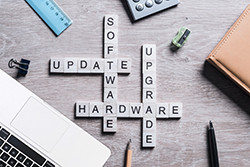 It may not be “broke”, but it’s still old. “Working” does not mean “secure”. Old software and hardware simply do not have the latest defenses like security patches and advances in firmware to keep you safe from new and ever-evolving threats.When was the last time you thought about software updates and hardware upgrades? For many, updating software and hardware is not a priority because “If it ain’t broke, don’t fix it”. However, it’s clear that today’s cyber attacks prey on vulnerabilities present in old software and hardware. (This holds especially true for operating systems such as Microsoft Windows.)

It’s not uncommon to see people working on outdated, unpatched Windows operating systems or other software that is sometimes 6 or more years old. You’ve probably heard this before, but it always bears repeating: Keep your software updated and patched regularly and automatically, and upgrade to newer software versions as frequently as you can. This should feel especially critical after seeing how missing OS updates have fueled massive ransomware attacks this year with both WannaCry and Petya.

The same goes for hardware like servers and PC’s. Hackers have found security weaknesses in them as well. Another effective way to increase your security is to update any computers in your business or organization that are more than 3 years old. New desktops and laptops will come with the new and better parts, such as better memory, network interface cards, hard disks, and processors such as the latest Intel Core ones. These processors can help your operating system and security software products run more efficiently.

And also keep in mind that often the latest software will not run on outdated hardware. Are your old PCs or servers holding your security up because they won’t run the best protective measures?

So we encourage you to commit to software updates and hardware upgrades as a regular task. You’ll be increasing your security as well as your productivity, getting the latest tools and fastest speeds.

Where do you stand with updates and upgrades?

Not sure where to begin? We can help! Contact us

← Are social logins safe to use? September Newsletter 2017 →