With headlines rolling in almost daily about massive security breaches and threats on your network professionals are becoming desensitized to cyber risks. Last year saw a year-over-year growth in reported breaches of nearly 20 percent, hitting a record of over 5,200 endpoints, IT security incidents in 2017. That’s 7.8 billion exposed records, costing the global economy $600 billion. 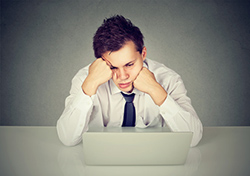 When data breaches are a predictable daily occurrence, it’s hard to react with as much shock, horror, and vigilance as you should. Oh, a sophisticated social engineering attack coupled with a zero-day exploit? It’s just another Tuesday in 2018.

Feeling numb to cyber-crime threats is such a common phenomenon it even has a name: breach fatigue. There’s too much crime to experience a blood pressure spike every time a new strain of malware is discovered, which happens every few seconds or so, but is there a middle ground you can reach?

The general population is experiencing record-high rates of breach fatigue, according to Iowa State University Professor Rui Chen. An ISU study analyzed Twitter data to understand attitudes toward a high-profile hack, and researchers concluded people are numb and less likely than ever to practice secure behaviors, like changing their passwords regularly. “When an incident happens . . . people read that news and they start to lose interest,” says Chen. “They take [cyber-crime] as a new normal in today’s society.”
IT pros should consider general feelings of numbness toward cybercrime a professional hazard. In fact, worker desensitization to excessive safety warnings is a well-known phenomenon called alert fatigue, in which busy workers become desensitized to safety alerts and fail to respond appropriately.

Wake up to risk

Five years ago, a major big box retailer lost 41 million customer records and the media had an absolute field day. There wasn’t nearly the same level of public outrage last year, when Yahoo admitted they lost 3 billion records, a credit bureau lost another 143 million, and countless other incidents emerged. The vast majority of data breaches fit a few common cybercrime patterns, and there are often months or years between the incident and disclosure to the public.

How do you know when you should try to recover from breach fatigue and pay attention to threats facing network endpoints?

There are real risks associated with a bad case of data breach fatigue, at least based on research on how alert fatigue affects other sectors, like a manufacturing work site or the medical field. Don’t just roll over and accept the fact that there are uncontrollable levels of raging risks to your network endpoints. Instead, lock them up with these straightforward strategies:

Stay resilient in the face of breach fatigue. You can’t anticipate when an incident will occur or the form it will take, but you can make sure you’re ready to recover. Cyber resiliency planning can help you make sure security basics, like endpoint protection, are consistently followed.

Resiliency planning also includes investing in backup and recovery solutions to avoid becoming another statistic in the list of businesses hit by ransomware. Don’t be apathetic; be proactive. While you can’t change the fact there’s a new cybercrime incident hitting the news almost every day, you can try your best to evade appearing as a featured headline in the latest security news.

Think you may be suffering from fatigue?  We can help… contact us!

used with permission from Tektonika (HP)
by Jasmine W. Gordon

No comments to show.